The causes of Coronary Heart Disease

It is not simply a cholesterol or blood pressure problem, although those factors play a role.

You don't have clean arteries and then wake up on day with clogged arteries.Atherosclorosis proceeds along three well-understood stages,and every one of those stages is influenced by DHEA and vitamin E. 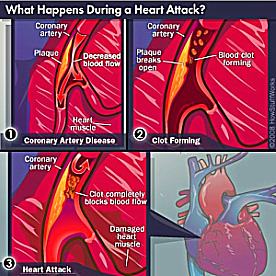 Here's what happens during a heart attack:

Cholesterol is a fatty substance and, like all fats, can become rancid. A chemist would say it oxidizes. The oxidation of cholesterol in the bloodstream produces damaging free radicals that injure the lining of the artery. The body's response to this injury or lesion is now seen as the beginning or coronary heart disease.

Vitamin E prevents the oxidation of cholesterol so that the initial injury does not occur. Now, that's PREVENTION.

In the lining of an artery, abnormal cell production contributes to the atherosclerotic process. DHEA prevents this excessive cell proliferation, and this has been proved in tissue cultures, animals, and humans.

In coronary patients, for example, those with arterial blockage greater than 50 percent were found to have lower DHEA levels than those without such extensive blockage. In fact, as blood vessels of DHEA increased, there was a corresponding drop in the number of diseased blood vessels and the extent of coronary atherosclerosis.

As plaque accumulates in an artery, the result at first may be chest pain (angina) or mini strokes. Heart attacks and strokes are caused by a completeblockage that prevents oxygen from reaching the heart or brain, resulting in cell death.

This blockage usually is caused by a clot that lodges in the narrowed artery, and these clots are commonly made up of blood cells called platelets. Research on human volunteers show that after taking 50mg of DHEA for only twelve days, a group of men showed an enhanced ability to dissolve blood clots.

From this "Coronary Heart Disease" page, back to "Cardiovascular Disease Definition and Facts"